Home Food & RestaurantsPortraitsPortrait of a Chef Jens Rittmeyer, no joy without sauce

Jens Rittmeyer, no joy without sauce 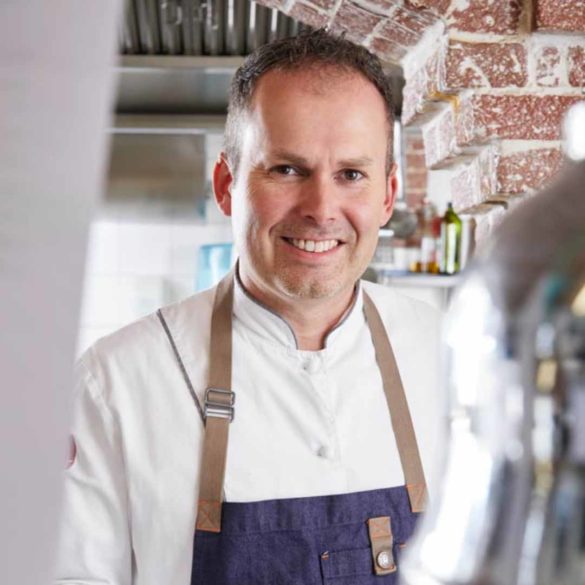 It’s a picture book perfect career: At only 26 years old, Jens Rittmeyer is promoted to kitchen chef and, shortly after in Portugal, gains his first Michelin star. A title, he still holds today. His great passion for excellent sauces earned him the nickname “God of Sauces.” Because more and more guests asked him for them, he produced different sauces in little glass containers on the side, to great success. These days, he prefers to listen only to his guests on culinary matters and loves to cook in the John Wayne-style. Hear more about that in our interview, which took place in his restaurant No. 4 in Buxtehude near Hamburg.

For some it might not be anything special but for Jens Rittmeyer it was heaven on earth as a child when his mum made baked camembert with a spicy tomato sauce. “For me and my sister there was nothing better!” the starred chef gushes to this day. He learned his love of cooking through his mother and grandmother. Even back then, he had a penchant for sauces. And so it was the best when he was allowed to make the tomato sauce himself.

That he would do an apprenticeship to become a cook after the tenth grade was crystal clear. Jens Rittmeyer is grateful for the many happy circumstances that fate provided for him. Thanks to the fall of the Berlin Wall, he was able to train in Baden-Baden, 750 km away from Halle an der Saale. “That opened up completely new opportunities,” the 45-year-old remembers. After various placements, he made his way to Xanten (North Rhine-Westphalia) in 2000, into the country house Köpp, where he learnt how to aromatise sauces. A year later, he moved to Dieter Müller’s restaurant in the castle hotel Lerbach in Bergisch Gladbach as a saucier. Alongside Eckart Witzigmann, Dieter Müller significantly advanced the development of the German elite gastronomy. In 1997, he achieved his third Michelin star. Early one, he concentrated on the art of classic sauces. So exactly the right place for Jens Rittmeyer! The young cook was ambitious and was not afraid of hard work or long days.

“Dieter Müller probably saw my hand in sauce cooking,” says Rittmeyer. “He gave me a lot of confidence. It was like a knighthood.” As a leaving present, the saucier was given an excellent report and an apron that read: “Thank you for the wonderful sauces, also from all our guests.”

In 2002, Jens Rittmeyer made his way to Albufeira on the Portuguese coast on the Atlantic. There, he was sous-chef in the “Vila Joya” and, a year later, was offered the position of chef in the “Sao Gabriel”, only fourty kilometres away. Eckart Witzigmann told the then 22-year old: “Boy, you can cook. If you think you can make guests happy and lead a team, go for it!” Jens Rittmeyer went for it – and got his first Michelin star.

Jens Rittmeyer spent nearly eight years on the Algarve. The enthusiastic hobby diver calls it “the time of my life.” “When you’re only a minute from the sea, that just gives you a great quality of life. With all the knowledge I learned in Portugal my cooking got quite a different style.”

“Boy, you can cook. If you think you can make guests happy and lead a team,
go for it!”

His next destination, the restaurant Kai3 (Hotel Budersand) on Sylt, profited from his new knowledge in 2010. With his team, he once more achieved a Michelin star. Four years ago, Jens Rittmeyer moved into new territory again: as the chef and gastronomic head of the restaurant No.4 of the Navigare NSBhotel in Buxtehude near Hamburg. But Buxtehude? People were at first astonished that such a renowned starred chef had moved into the provinces. But Rittmeyer was delighted with the environment. He was instantly taken with the old country with its amazing fruit and vegetables. Especially, because his new boss let him do whatever he wanted. In 2017, he got a Michelin star here too. With his artful but uncomplicated and veg-based kitchen, as well as his first-rate sauces, he was able to win the hearts of many gourmets.

Furthermore, he continuously surprises his guests with new ideas: For the past three years, for example, the Farm-to-Table Dinner has taken place right at the edge of a field. The idea: On a few days in summer, a menu is cooked and served right there where the ingredients grow. Jens Ritmeyer found the perfect provider of his food in the farmer Kerstin Hintz and her organic farm Biohof Ottilie. From the veg patch directly onto the plate – it can hardly get any fresher.

In Buxtehude, Jens Rittmeyer has specialised more and more on specific veg dishes – even with old varieties such as salsify – and he cooks regionally and seasonally. His guests thank him for it. On request by many a visitor, there is especially an intermediary course with only bread and sauce. Not for nothing is he called the God of Sauces here.

One too many times, Jens Rittmeyer heard people say: “What a shame that one can’t buy your sauces here!” On Sylt, his guests could take them away filled in provisional glasses without a label. In Buxtehude he could finally take the opportunity to create his delicacies on a larger scale. In the meantime, you can buy more than a dozen sauces online. “Over the last few weeks, I’ve filled 1200 glasses with 200 ml each,” he explains. His cooking courses, too, are very popular, and book out fast. The man is a workaholic and works around the clock. But you don’t really notice that when you meet him. On the contrary: he is relaxed, easy-going, and humorous.

“I am happy when our regular customers continue their visits even in these difficult times,” he says. Because of the crisis, the restaurant’s concept has been changed. “We only open on a few days at a time and try to make the evening even more personal for our guests. That also means information about produce or their preparation. And the people are thankful for it.”

At the beginning of 2019, Jens Rittmeyer and his team decided that there would not be a pre-decided menu online, that the menu is not sent out to his guests. The regulars loved the Farm-to-Table concept with its surprise menu so much that they asked to receive that in the restaurant itself too. “At the moment we only serve surprise menus,” the starred chef explains. “We would never have thought that the idea would find so much enthusiasm. The guests have a completely different expectation. This way, they learn about new products and meals without prejudice.”

A further bonus: the kitchen can be very flexible and exchange one vegetable for another. That’s something that Rittmeyer learnt in Portugal. “I love to cook in John Wayne-style. This can stress my colleagues a bit. I like to improvise and say: “Relax, we’ll make something delicious, just you wait.”

What do his plans look like? “One day, I’d like to have my own place. A kind of shop with delicatessen in the foreground, perhaps also a snack to go, and then a backroom with a glass kitchen, three tables, where you can enjoy Rittmeyer’s cooking. But, at the moment, I’m very happy.”

Luthier, a craftsman who listens