The Clairefontaine moves with the times 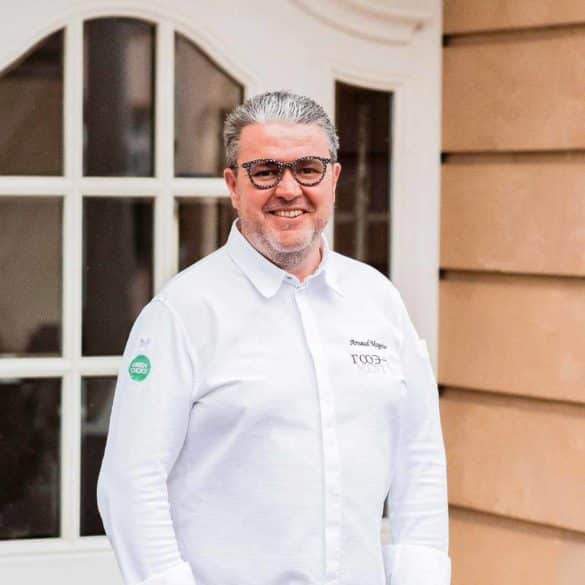 Everything is to be renewed? Well, almost everything. Arnaud Magnier (51), Chef of the Clairefontaine restaurant at the heart of Luxembourg City, started the New Year with big plans: “We’re throwing everything away. We’re creating a completely new interior.” Only one thing was to remain the same since 2001 when Arnaud Magnier took over the Clairefontaine with his wife Edwige from the cooking legend Tony Tintinger: the kitchen. “Nothing will change there. I won’t create a new kitchen that I don’t have control over and that isn’t me.”

The furniture, crockery, and even the red leather had to go. The wood panelling, commissioned by Tony Tintinger in 1984 from an Alsatian carpenter, will survive the second renovation in Magnier’s time. “That is really extraordinary work,” the Chef says. For everything else, “we plan to move with the times. We will make use of different materials to underline the modernity of our establishment. We want to attract younger people into our restaurant too.”

Originally, Arnaud Magnier had planned the renovation for August 2020. On account of the coronavirus lockdown, he had to postpone it to January 2021. “We want to create a different image,” he says. “We listen, we pay attention to the remarks of our guests, look around.” And so, one realized that while the Clairefontaine counts as a good restaurant that had a lot going for it and where the food was good, many people thought that it lags behind the times somewhat.” Now, it is getting a makeover.

“If you are not an optimist in our profession, you might as well throw in the towel.”

The Clairefontaine has often re-made itself. In Tony Tintingers’ time, the restaurant was described as “the government’s cantine” where Grand Duke Jean, as well as Prime Minister Jean-Claude Juncker, were regulars. “That’s completely different now,” Arnaud Magnier says smiling. “We’ve tried to get rid of the image that this restaurant is reserved for ministers.” Sixty percent of the guests are private citizens or tourists now, forty percent are businesspeople. These days, one can count the number of government events in the Clairefontaine on one hand.

That has not harmed the image and culinary quality – still presented with a Michelin star. “I create a classic kitchen, as other people call it,” says Arnaud Magnier. He knows that it’s not the newest trend: “But there are a large number of people who love this kind of cooking style.” Call it a “cuisine généreuse.” The menu changes five times a year – the fifth season is the truffle season – and there are only a few constant choices. One of them is filled Bresse-Poularde. So popular with the guests, every year around one ton of the dish is made. Another constant number on the menu is Carpaccio de St Jacques, made with truffles.

After completing his training years with starred chefs, Arnaud Magnier worked in the kitchen of the Elysée Palace in Paris and for and with Bernaud Loiseau. He never regretted the transition into independence in Luxembourg. “There were difficult times. But we have a very loyal customer base, and we are positioned at the centre of Luxembourg. There are no regrets.” At most, that the Grand Duchy’s capital has changed a lot over the last twenty years. “The city has become difficult. People used to congregate on the streets in the evenings – these days, it’s all completely quiet. The big companies and banks don’t occupy the city centre anymore, it’s difficult to get parking. “In order to eat at our place, you really need to go the extra mile.”

Nevertheless, he is confident. “We will get through this,” he says about the closures in the gastronomy on account of the coronavirus. “After a crisis, there is always a new beginning.” We’re doing everything we can to optimize working conditions. “If you are not an optimist in our profession, you might as well throw in the towel.”