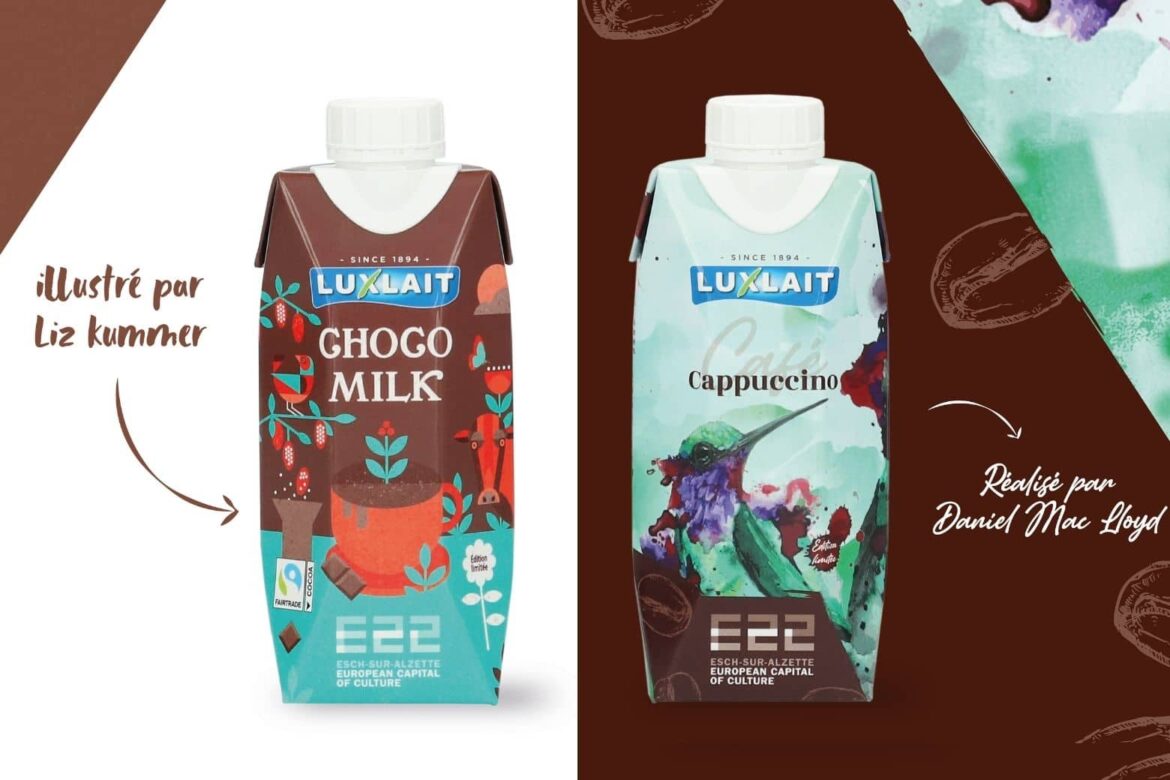 After the work of Luxembourg artist Alain Welter on the Bofferding bottles, it is Luxlait’s turn to collaborate with local artists in the framework of Esch 2022.

With more than 128 years of existence, Luxlait is part of Luxembourg’s heritage. Kachkéis and the “Rose” Butter have become essential products, featured in songs, comics and films. Artists such as Jacques Schneider and Lynn Cosyn have even included Luxlait products in their works.

“Luxembourg culture is very important to us and we try to highlight it through interactions with local artists“, says Gilles Gerard, Luxlait’s General Manager.

In collaboration with Esch2022, Luxlait has decided to launch two limited editions of the UHT chocolate and coffee shakers designed by Liz Kummer for the chocolate and Daniel Mac Lloyd for the coffee. These limited editions will be available in shops for about two months and distributed at some Esch2022 events. With this partnership Luxlait strengthens its collaboration with the Luxembourgish cultural world.

“Our objective is to involve local artists in our project and to give more visibility to Esch2022 with the support of ambassadors from the private sector. With Luxlait, supporting partner of Esch2022, we have concluded an impactful partnership and we are very happy about it“, Nancy Braun, General Director of Esch2022.

Focus on the artists

Liz Kummer is an artist from Luxembourg, who has made a name for herself with her illustrations of animals and women. Trained as a visual communication designer, she worked for several years in a multidisciplinary communication agency before setting up her own design studio focusing on illustration and graphic design in early 2022. Fascinated by clear graphic compositions, she experiments in her work with reduced geometric forms, color combinations, patterns and structures. She creates stylized natural patterns with simple shapes that, despite their complex arrangement, fit perfectly into each other.

Growing up with a brush or pencil in hand, his fascination with color, material and form began at an early age. Inspired by an exhibition in a small contemporary art gallery in the south of France, he began painting on canvas and brought his work to a level that could be shown in a gallery. His artistic career began with his first exhibition in 2009 showing synergies of abstraction, pop art collage and graffiti elements. Influenced by graffiti, graphic design and inspired by the magic of details found in the streets, his style has found its way to the type of urban contemporary art it is today.

A symbiosis of Graffiti, watercolor and abstract forms, often in combination with bird or sea creature motifs in all dimensions.

Not only did Daniel win the Benelux2018 Street Art Award, but together with Raphael Gindt he also established his own urban art gallery and creative space in Esch/Alzette, impacting the entire art scene in their home country.

An open-air library in the city!