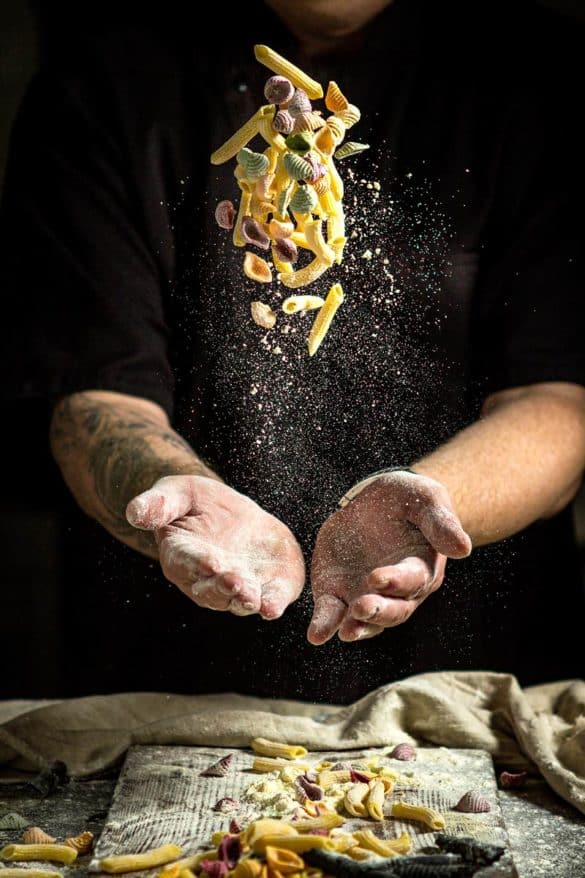 Durum wheat, water, and occasionally an egg – that’s all you need to make one of the most popular dishes in the world: pasta. But how is it that such a simple product has become a staple in the kitchen of so many people?

Have you ever thought of a bowl of potatoes for a candlelight dinner? Yet, a plate of steaming pasta, topped with a fruity-fresh sugo and a glass of red wine – simply beguiling. Pasta is poetry for the palate, strokes your soul, awakens an Italian attitude of life. Soothing images from the dream destination south of the Alps float in front of your eyes: the Nonnas, who spend their Sunday morning passionately kneading the pasta dough, the Familia that sits at the table together, gathered around a large pot of pasta, that small Trattoria from the last summer holiday.

The home of pasta

Pasta belongs to Italy as salt does in soup. So, it’s almost strange that the cradle of the noodle is not in Italy but in the Far East. A ground-breaking find in 2005 decided an ancient feud between nations: archaeologists discovered a pot of around 4,000 years old, in whose bottom the remains of noodles made from millet dough were found. The theory, that it was Marco Polo in the 13th century who brought the noodle from there to Italy, is also refuted. Scholars found equipment to make noodles in Italian graves from the 4th century. These days, therefore, historians are agreed that the beloved dough specialty was most likely invented in many different places independently from each other. It is, however, a fact that it was in Italy that pasta (which is, of course, only one type of noodle) received cult status and began its victory marsh across the world. Today, we encounter pasta both at home, as well as at the snack bar or gourmet restaurant.

Beloved by the world

Even if the noodle appears regularly on plates from Egypt to Argentina, from France to South Korea, Italy is still the number 1 land of pasta. According to IPO (International Pasta Organisation) every Italian consumes a full 23.5 kg per head per year. Second in the world are the Americans with 9 kg, followed by the French and Germans with 8 kg a year. The past COVID year has increased the intake – not least visible in empty pasta shelves of the supermarkets. One of the reasons is surely that the dry dough product can be stored so easily. But much more important is its excellent ability to combine with almost every other ingredient. With very few steps you can achieve multifaceted delights such as Tagliatelle with courgette-salmon sauce, Orecchiette with peas and pancetta, or spaghetti with avocado sauce and prawns. And the same dish can taste completely different with a different pasta variety.

Combining pasta and sauce is, by the way, a science all on its own. And nearly every Italian village has its own traditional versions. Pasta afficionados combine fine, creamy sauces with thin noodles such as Spaghetti or Linguine. Coarse sauces, such as Bolognese, harmonize more with big, broad noodles such as Rigatoni or Tagliatelle. The classic Spaghetti Bolognese, beloved in Luxembourg, will not be found so regularly on Italian menus – unless the restaurant caters for tourists, of course. A similar faux pax is to add the sauce when the pasta is already on the plate. The pasta should be mixed into the sauce directly after cooking. Only then do the two enter into an intensive liaison. The principle that the sauce waits for the pasta (not the other way round!) applies. But take care: if the cook has added oil to the pasta water, then the sauce will not adhere well. It’s better to stir the pasta with a fork while cooking in order to prevent sticking. Something that’s done a lot here is rinsing pasta in cold water, but pasta lovers should abstain from that. It causes the coat of starch on the pasta to disintegrate, and any sauce will not adhere so well. Pasta water is, by the way, a brilliant sauce binder. That’s because the starch enters the water during the cooking process. If you add a portion of the water to the sauce it gives it a creamy consistency.

How long the pasta is cooked naturally depends on personal taste. It is said that pasta used to be cooked very soft – for up to an hour. In the 16th century, that changed when street vendors in Naples began to serve their wares “al dente” (to the tooth). The shorter the cooking time, the bigger was the turnover – that was the winning thought. It is a fact that pasta keeps you fuller for longer and doesn’t transform so quickly into fat when it is cooked al dente. The body needs longer and more energy to break down the complex carbohydrates. If you want to enrich your diet with extra fibres, check out the pasta varieties made from pulses. Pasta made from chickpeas or lentils fill you up for longer, are rich in proteins, and stimulate the digestive system. They are also an ideal substitution for people who can’t eat gluten.

It just goes to show once more how versatile pasta dishes can be. Last but not least, there are around 600 pasta varieties. I bet you can find several types even some Italians haven’t heard of.