Um plateau – A history of flavour(s) 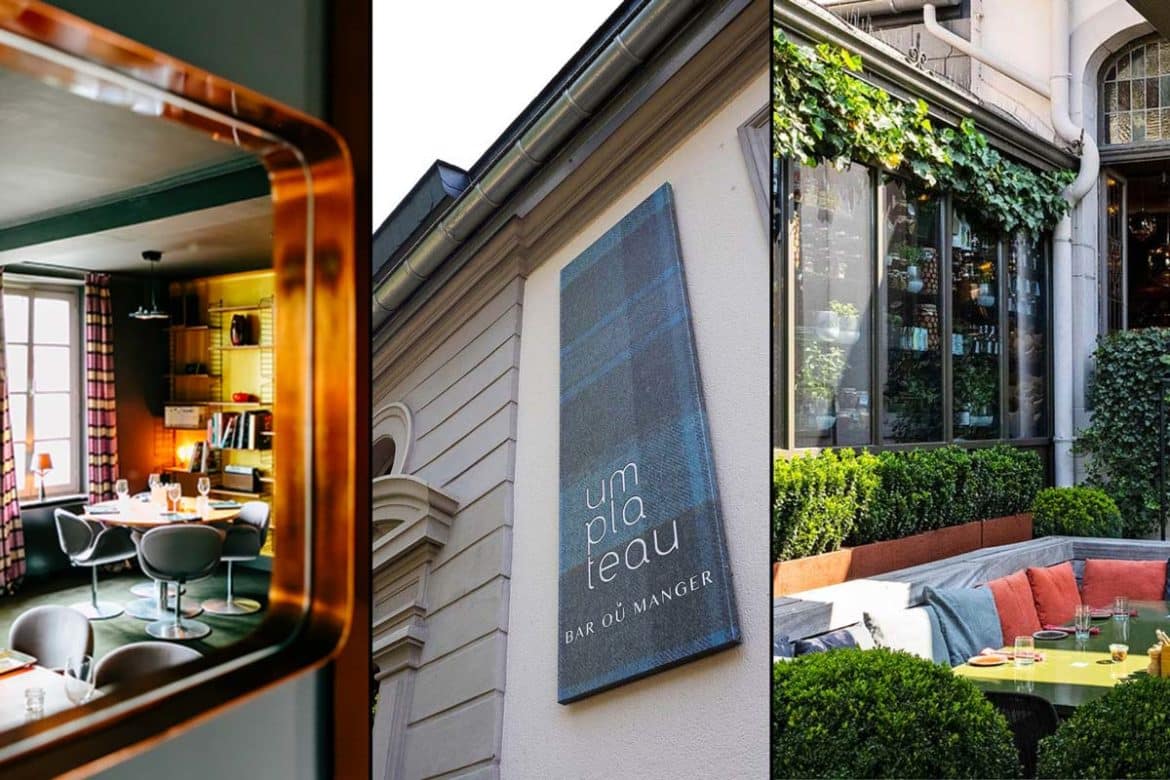 It’s a haven of peace and relaxation situated between the old town and the Rives de Clausen area. Just 10 minutes’ walk from the Place d’Armes, a warm welcome awaits in this old listed building which has retained part of its original stained-glass windows, because history is an integral part of this convivial space.

The history, firstly, of a restaurant which opened in the 1980s. As the years went by, Roland Sunnen’s establishment became one of the coolest places to be in Luxembourg. “Mythical,” the papers would call it. The whole of Luxembourg wanted to meet there, the party never ended and the champagne flowed freely. But the great man bowed out in 2003. He probably made “Um Plateau” the City’s Place-to-be. A little while later, a young Belgian woman, who was already a city restaurateur, decided to take over the premises with her then business partner. Stéphanie Jauquet evidently saw it as a challenge to put the spark back into this exceptional place. The reopening in December 2008 was a success. The customers went back to their good old habits.

A few years later, history was made again. A new partnership was forged: the owner, Belgian from Namur, hired a very young manager called Jonathan Germay. Stéphanie Jauquet knew him well: he was the son of restaurateurs who had trained her when she was starting out. A family story, to some extent… She placed her trust in him and he would go on to breathe new life into the thirty-year-old establishment. In 2016, “we decided to change the concept to help it move with the times.” Um Plateau also became the “bar to eat in,” where you could get a delicious aperitif whilst snacking on sharing platters. One of the three traditional restaurant rooms was transformed to achieve this: high stools and standing tables have appeared, a large bar has been created where you can graze whilst keeping an eye on the barman as he sets to work creating cocktails (ask Florian for a Gëlle Fra or his recent award-winning elixir, the Uisge Beatha!). This new space gives the restaurant an even more dynamic vibe, blending designer furniture and sumptuous stained glass with Luxembourger hard furnishings.

Of course, the very intimate and very plush lower room is still there – this is where the “longstanding clientele” like to meet, those who have known Um Plateau since the very start of its glory days – just like the upper room, which is comfy and warm, perfect for bad weather, and which gives the impression of being a “Home sweet home.” A huge and stunning mirror adorns the entrance: it belonged to Stéphanie Jauquet’s grandmother. Another lovely story.

As for those sunny days, there is a huge terrace which can cater for up to 90 covers, and which has been recently revamped to offer an ambiance with a Mediterranean palette. Pots containing box bushes and new terracotta tableware compliment the olive greens and bamboos.

At Um Plateau, the clientele is hugely varied, both Luxembourgish and cosmopolitan. Here they can enjoy a menu which changes every 5 to 6 weeks. “We offer simple but carefully-selected produce”, explains Stéphanie Jauquet, who also manages the brand Cocottes that champions fresh, seasonal produce, local artisans and environmentally-responsible practices. “We explore global cuisines, from Japan to Italy via Knokke! It’s tasty, generous cooking.” For sure, the pleasure is in the eating, but you also come to Um plateau to benefit from a “package” of unique conviviality, including décor, music, clientele and ambiance. And for that to work, Stéphanie Jauquet has spared no detail. In particular, by offering an impressive wine list (twenty-odd champagnes, wines by the glass, forty or so white wines and sixty odd red!), which doesn’t merely feature classic wines, but goes on, with a series of “Beautiful Bottles”, exceptional bottles of wine (forty or so whites, and more than a hundred reds), which the establishment has chosen especially to please the most discerning connoisseurs. What better than choosing exception in diversity? History teaches us…